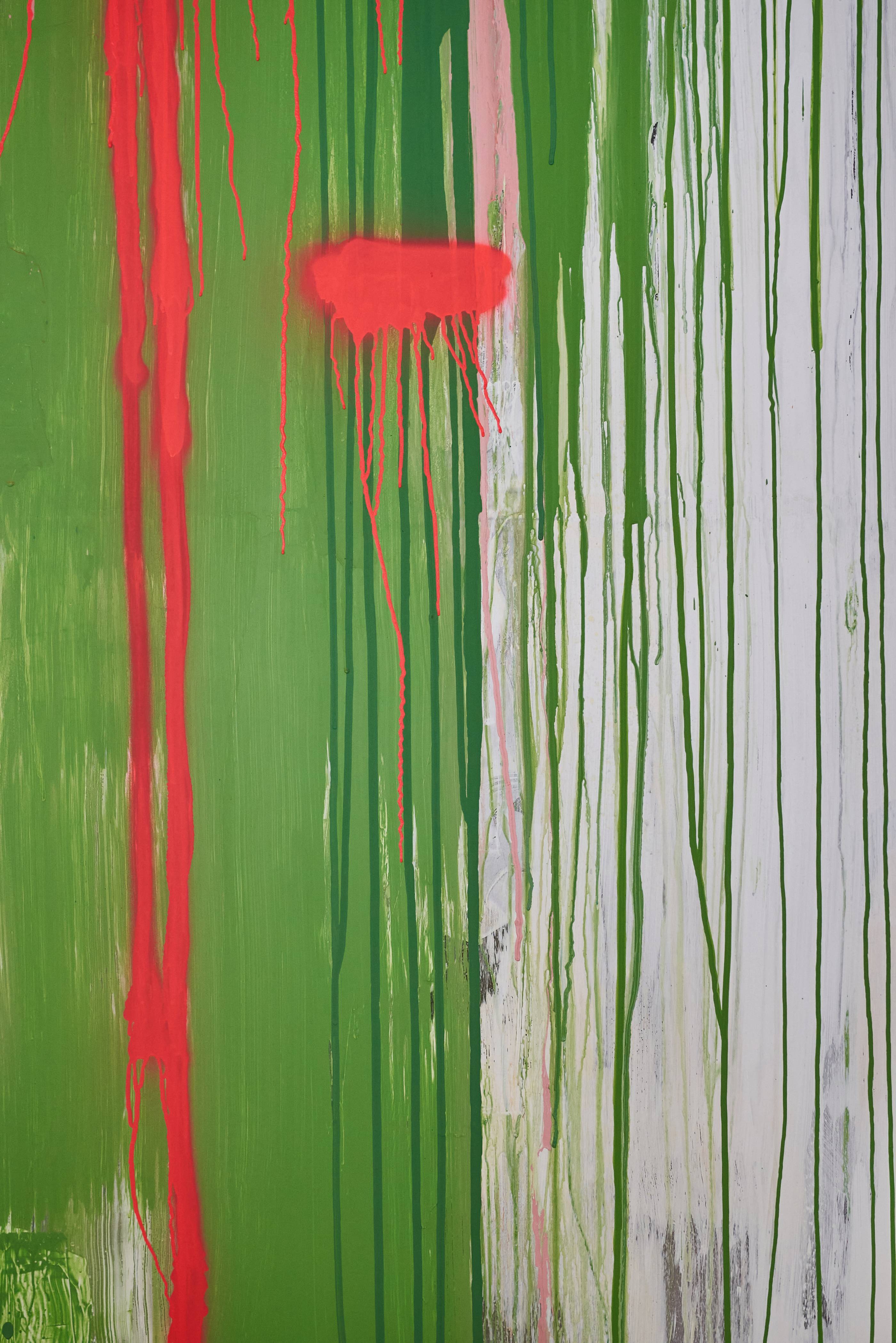 In 2020, St. Petersburg restaurant ‘Animals’ undertook a change in the team and cuisine concept. This was followed by the realization of the fact that the old interior had long ago failed to reflect the restaurant's new values and there was no perfect match between the cuisine and the interior. The idea to change the design came at the very beginning of the summer season, when it was impossible to close the restaurant for a long time.

Inspired by the European experience of restaurants that can travel to super-unique locations for several days and prepare sets, we decided to undertake a POP-UP project – to transform the old restaurant into a new place and to revitalize it with minimum resources.

POP-UP means temporary architecture. This is a head-turning experience; it is an example of specific architectural hooliganism for us. The coolest thing about this format is that you can use offbeat tools and methods. It means a search for quick and non-standard solutions for us, an opportunity to use simple and accessible materials; for the client this is the way to tell about his space a bit earlier than the completion of a permanent project.

In our projects, we are interested in telling the history of the place by using visual tools. As to the ‘Animals’, we wanted to convey the story of talented young chéfs who cook simple and cognizable food from local products with a focus on quality and unexpected combinations. So we based our project on the specifics of the cuisine.

The key emotional component of the project, as chosen by the developers, was the feeling of staying in a farm where people get from a noisy metropolis. When developing the concept of the hall, we wanted to emphasize human kinship to nature and to create an interior that would be a perfect complement to the food served at our place. We wanted the guests, finding themselves within our interiors, to feel like in the countryside, to sense the impromptness of country life, to admire the natural textures and enjoy the taste of food.

The restaurant team cooperates with a farm in Stanskiye village of Pskov region, where vegetables, fruit and berries are grown, brought by the chéf personally to the restaurant every week. They are used to prepare the main menu, specials and seasonal dishes.

In addition to the renovated kitchen, ‘Animals’ now has a solid and self-sufficient bar with original drinks and seasonal cocktails, instead of the one that needed extension.

We transformed the first hall into a metaphorical greenhouse, assembled of warehouse-style metal profiles with phyto-lighting, filled with various garden crops in ceramic pots that yield a harvest several times a year.

One may stay here with a glass of sparkling wine at a table under a shelf with grapes, or take a seat at the bar and watch the bartender at work.

The second hall is fully used as a restaurant space; its main element is a long wooden workbench-style table with vintage chairs bought at a flea market. It is associated with the history of friendly feasts and family meals. Such a table can be safely imagined in the interior of a country house, but in ‘Animals’ it is hyperbolized and occupies almost the entire length of the hall. It was important for us that the table should be the center of the space where like-minded people and friendly companies, who come to try local products, could gather. This table can be used for experimental set-dinners or noisy breakfasts.

We wanted to get rid of the description "that restaurant with yellow walls".

For this, we needed an interesting and complex texture in natural colors with a minimum of investment. We had all the walls and ceiling plastered with simple building roughcast and got a perfect effect.

Another challenge was to come up with brand-new seats without having to buy new furniture.

We found a compromise: we left the existing furniture around the perimeter of the hall, completely changing its appearance. We had linen covers sewn for the chairs, reminiscent of clothes used to cover furniture in palaces when the owners were away.

Meanwhile the existing monochrome countertops were painted in neutral colors.

In addition, the interior needed some bright accent. We placed a panel in a wooden frame with bright, accentuated spots onto one of the walls. The panel is printed on a film used to cover greenhouses.

POP-UP projects suppose a super-fast course of construction. The bureau's team was actively and directly involved in the work – we helped the artists to paint canvases, made patterns for the walls, and helped to assemble the shelf stands.

It took about a week to redesign the space, while most of the work was completed within a record time of 4 days, after which the restaurant opened in the renewed format.

This project was designed tentatively for one year and will be modified and supplemented, depending on the season, as concerns both the cuisine and the interior. 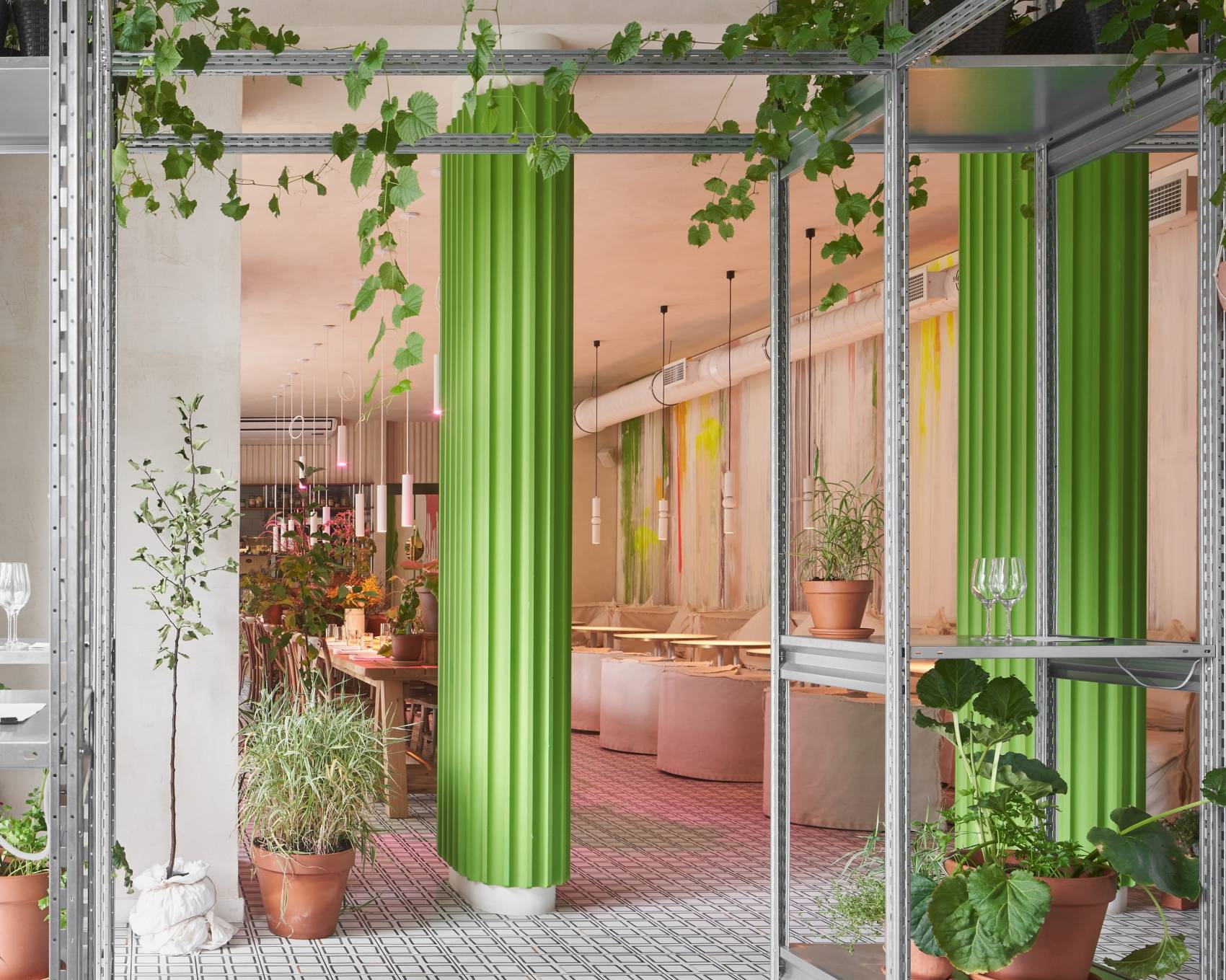 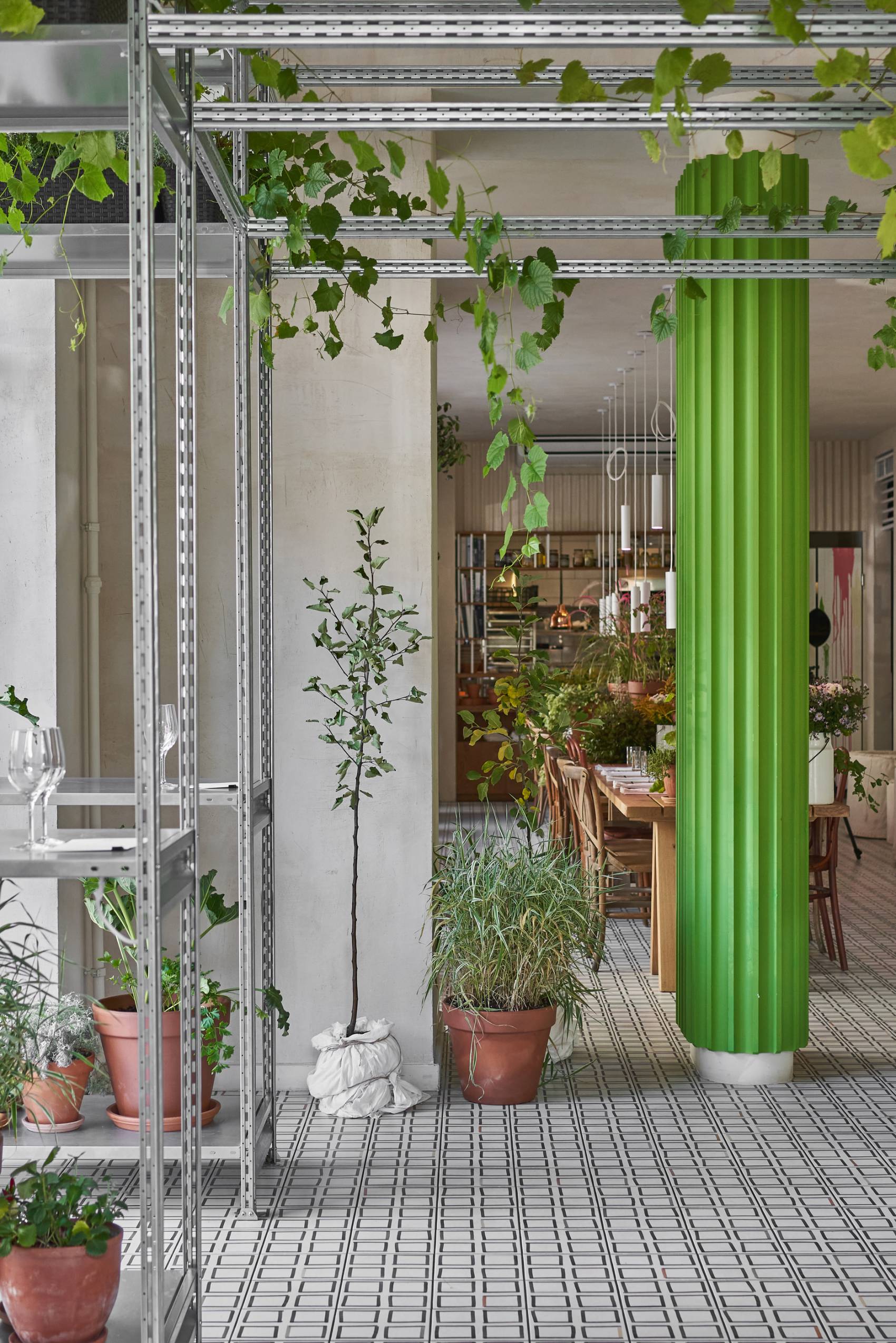 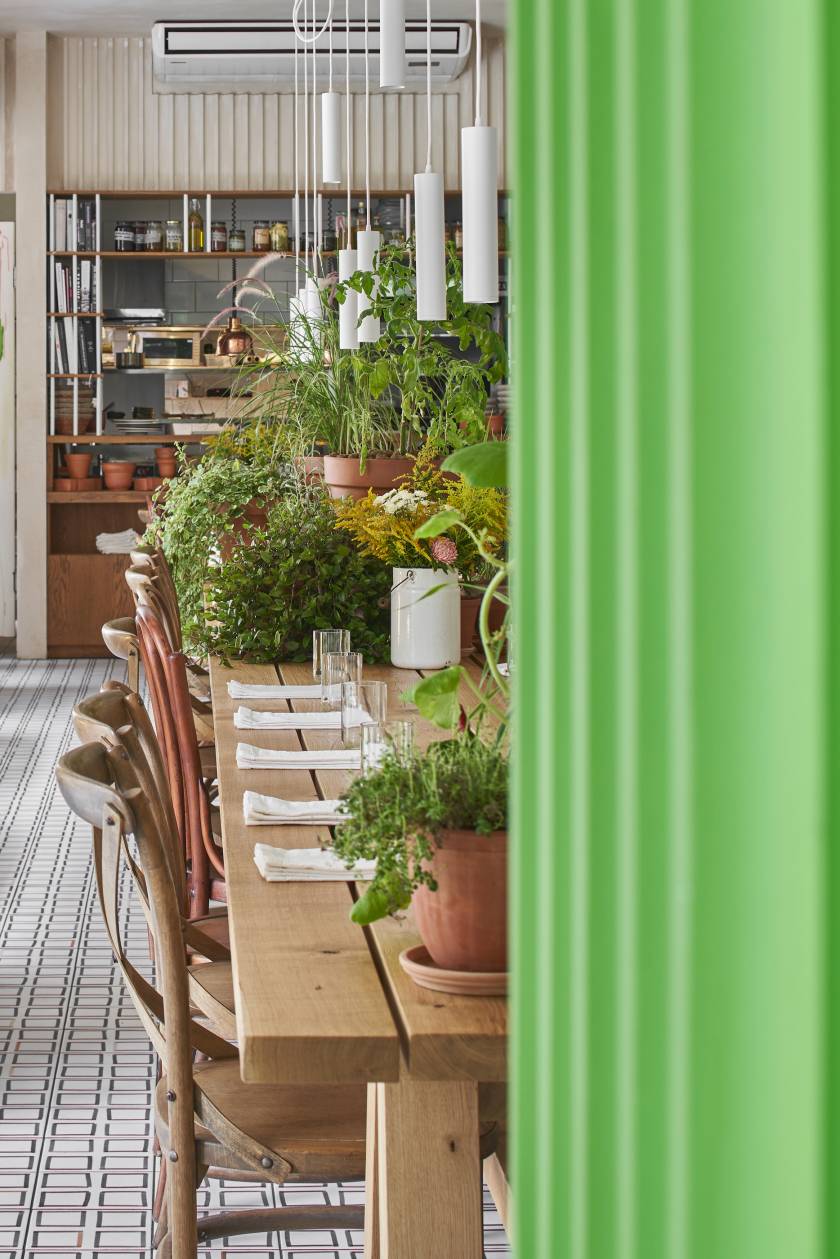 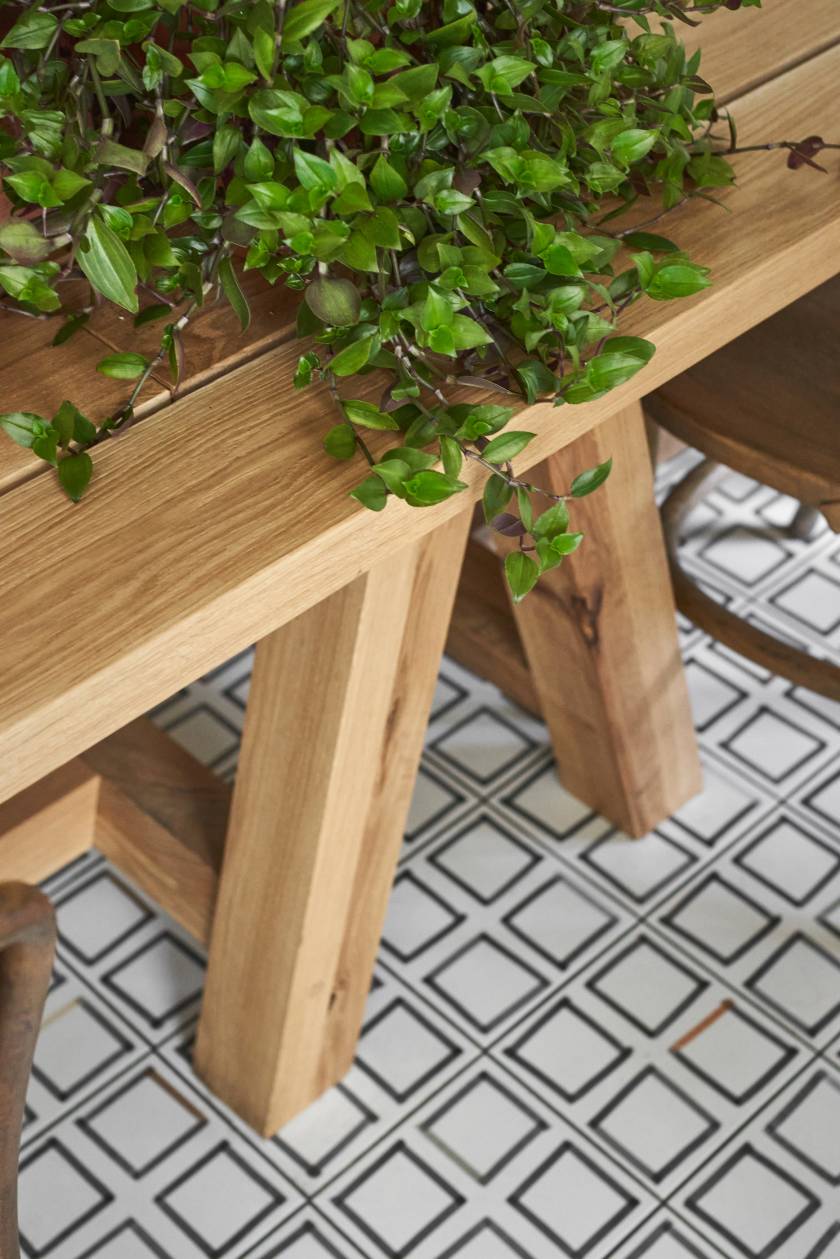 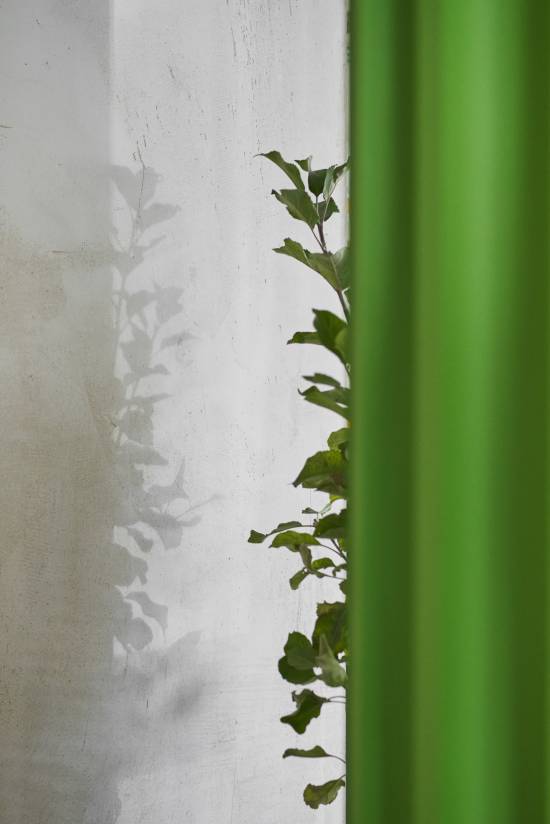 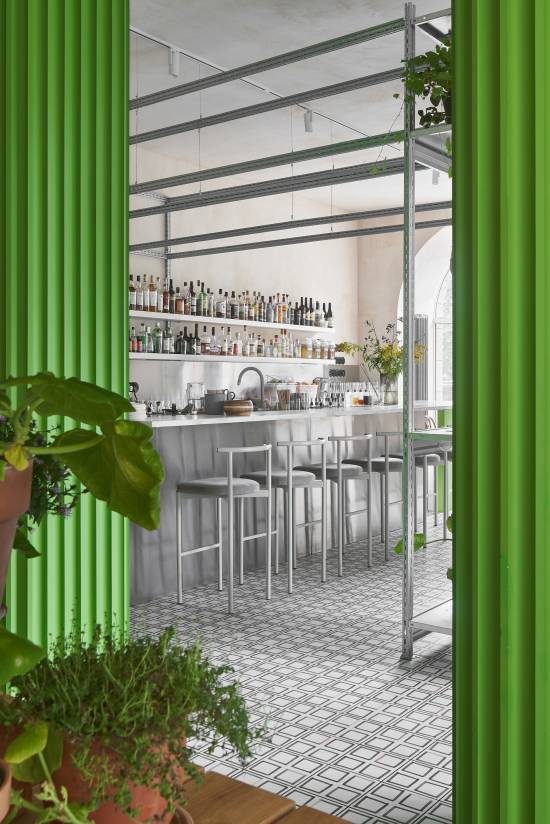 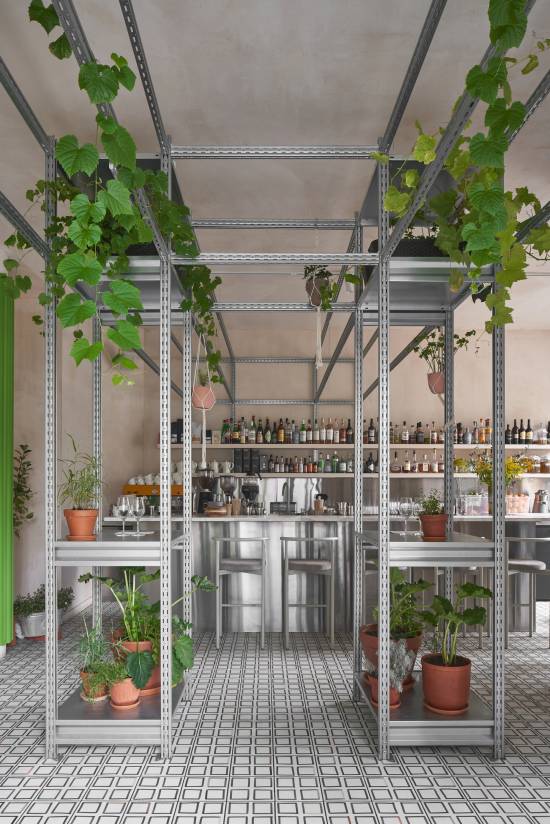 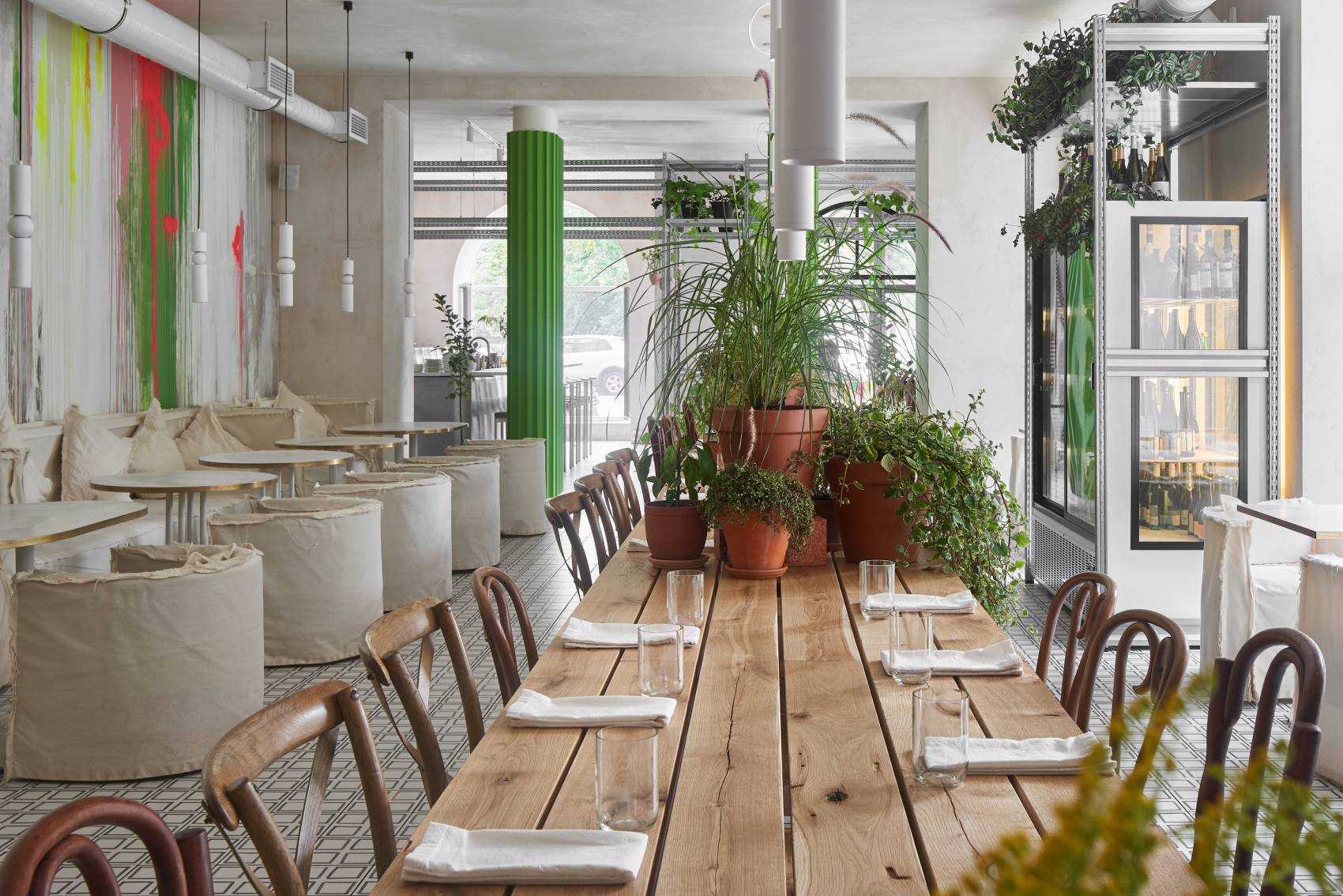 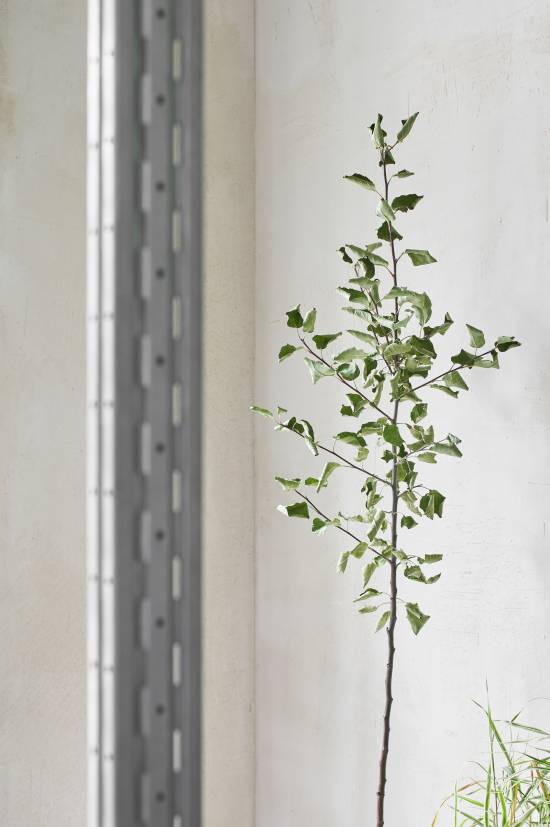 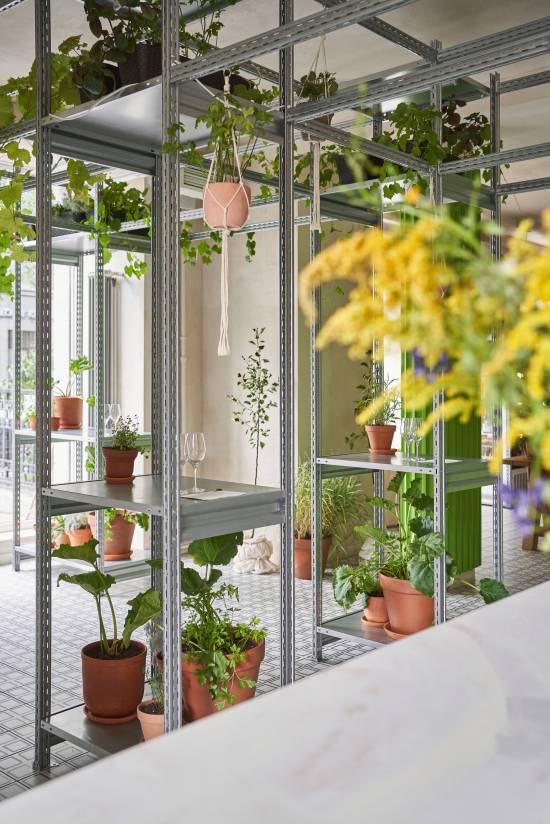 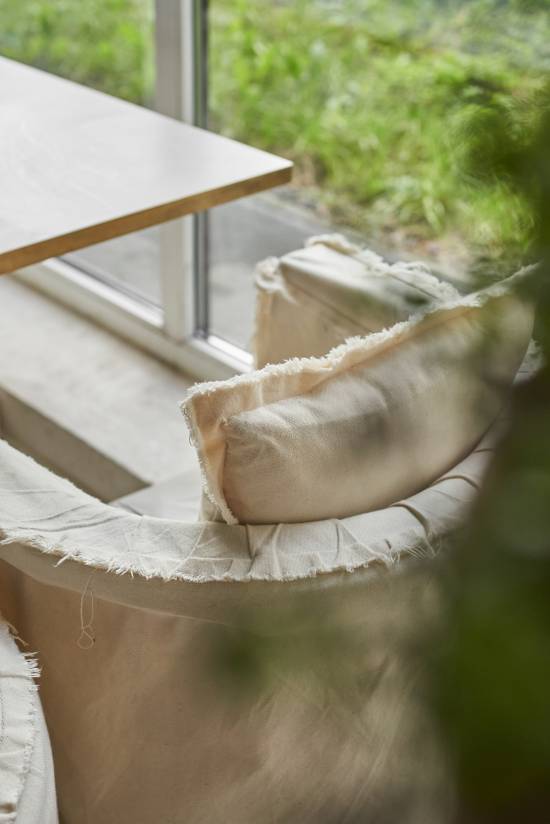 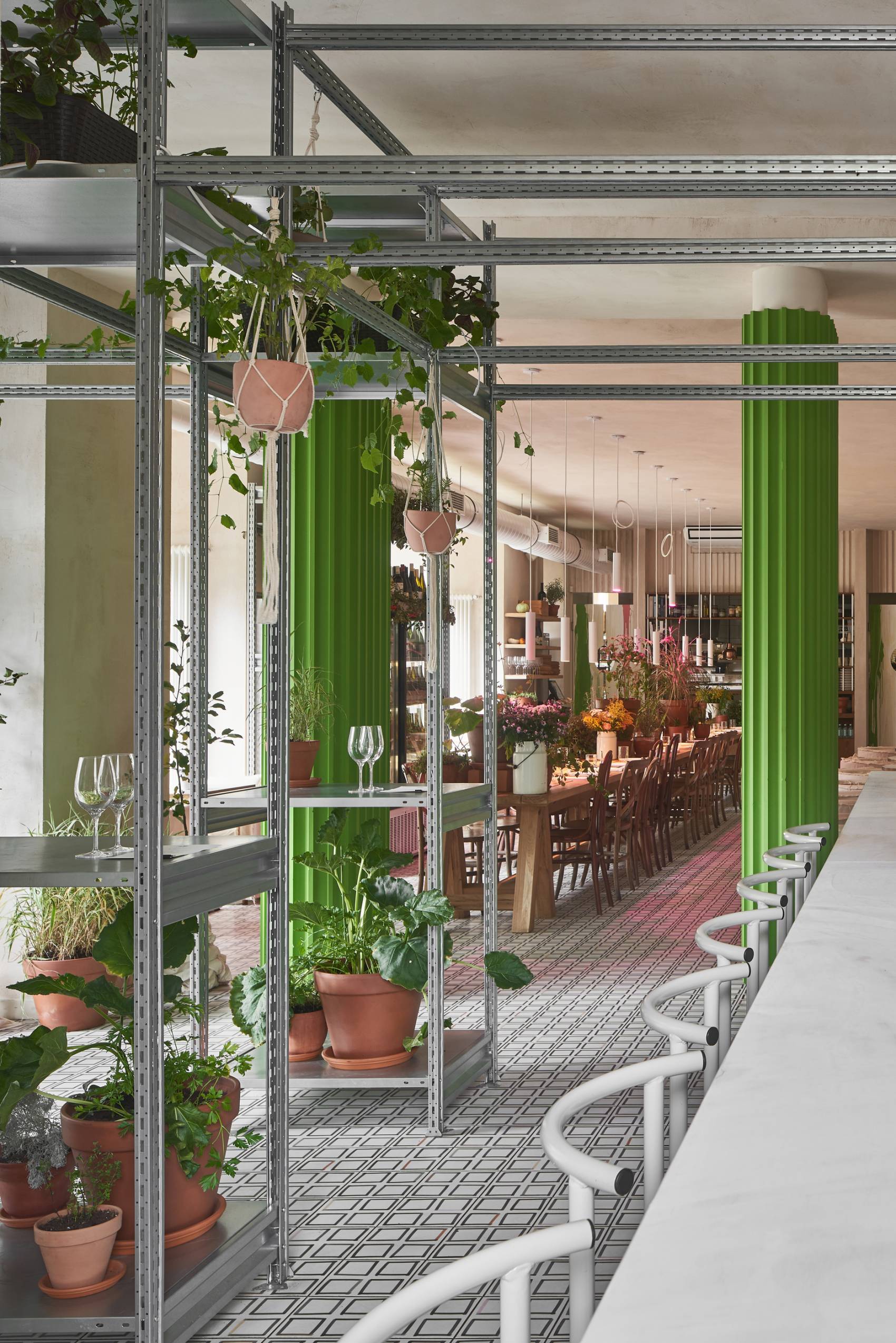 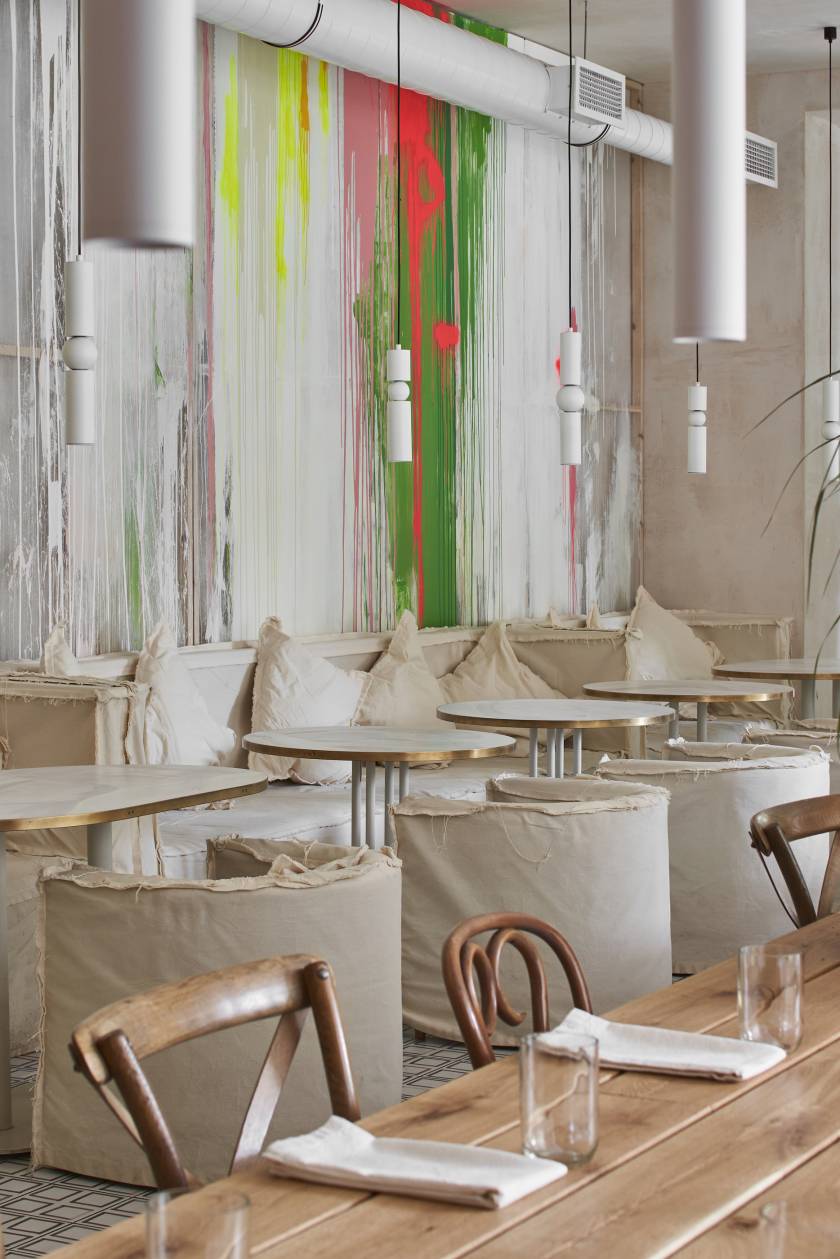 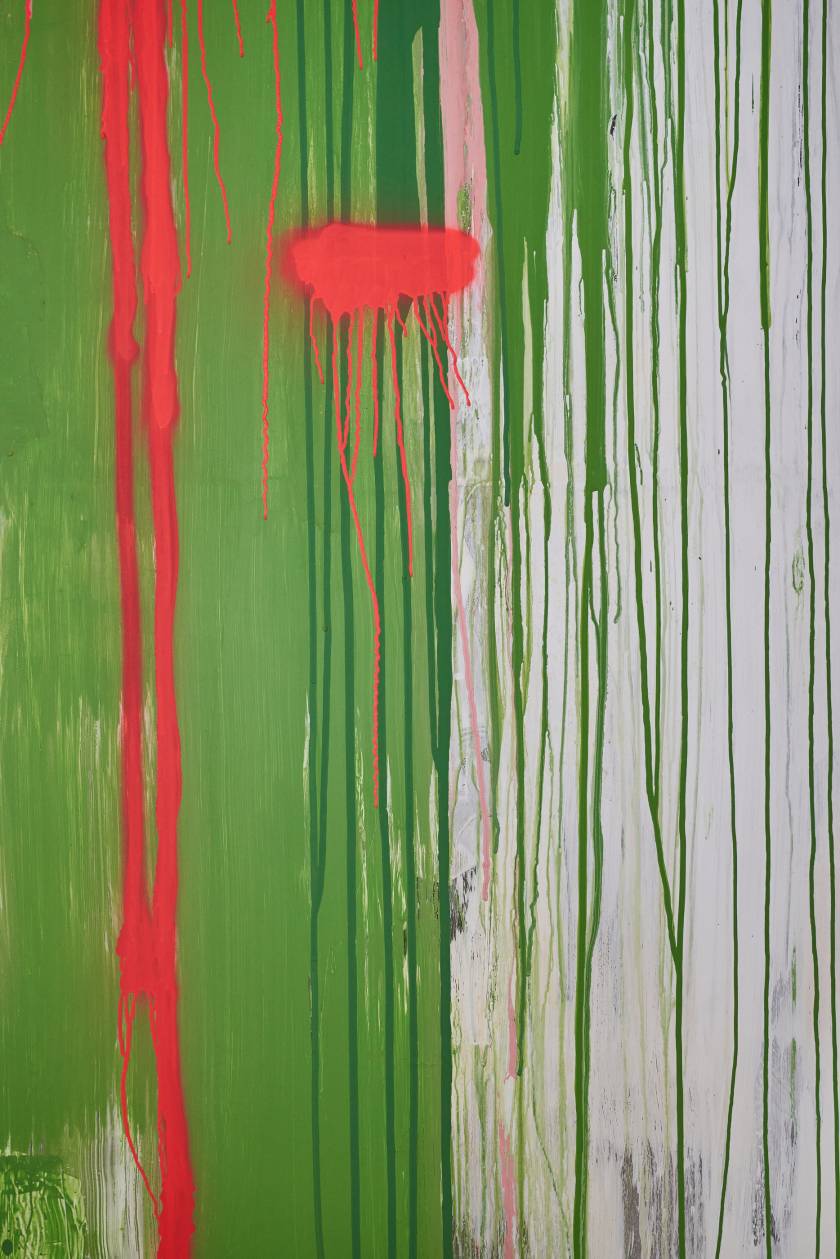 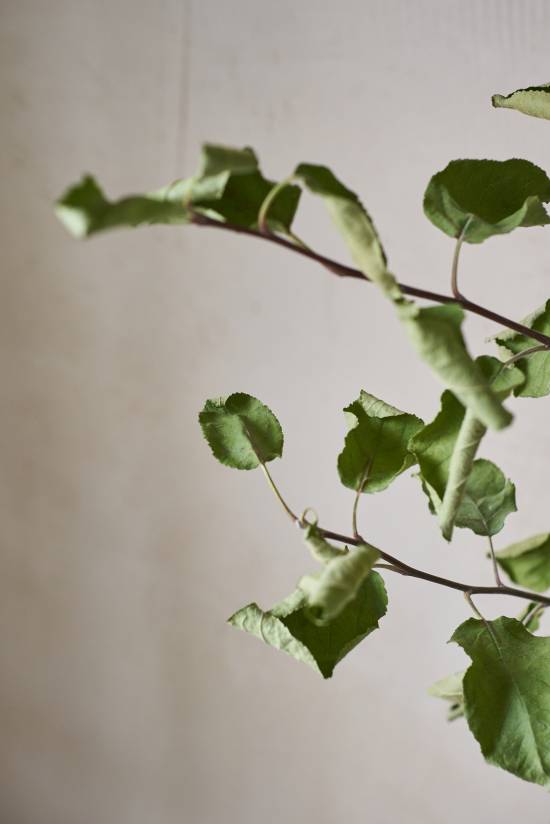 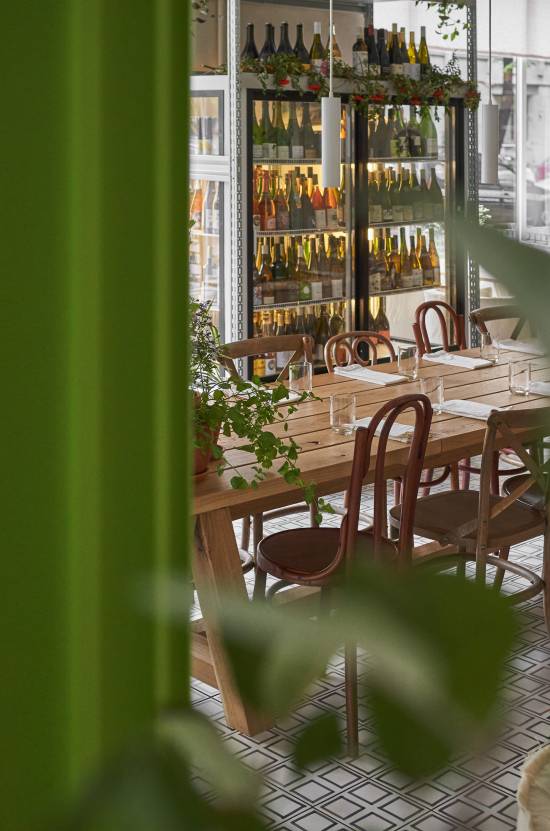 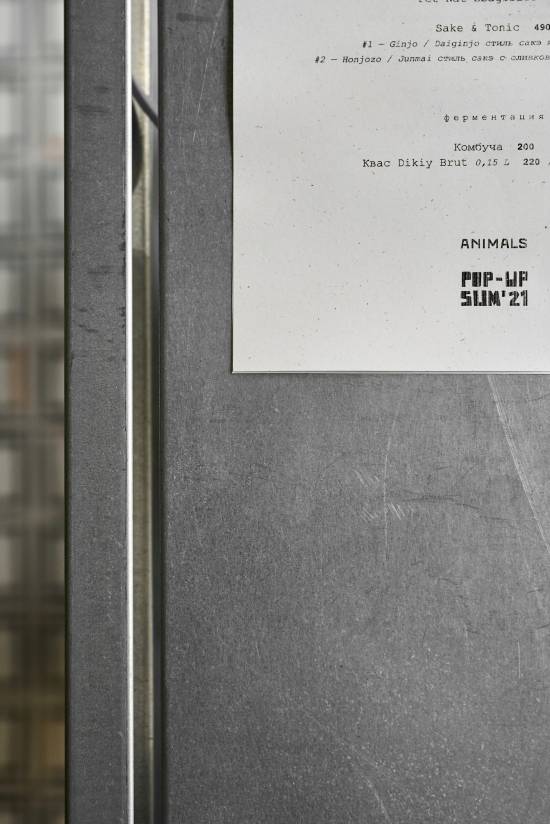 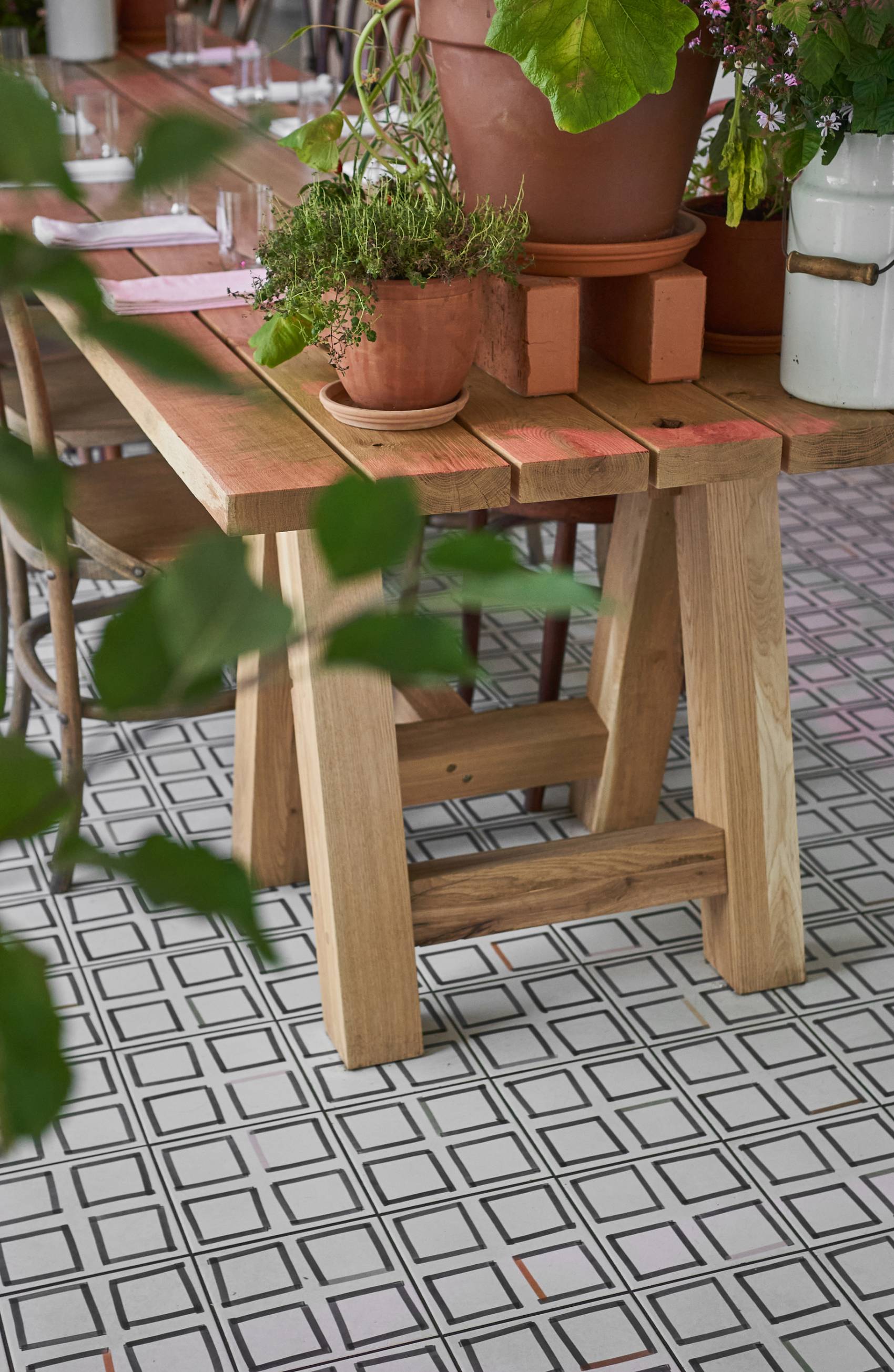 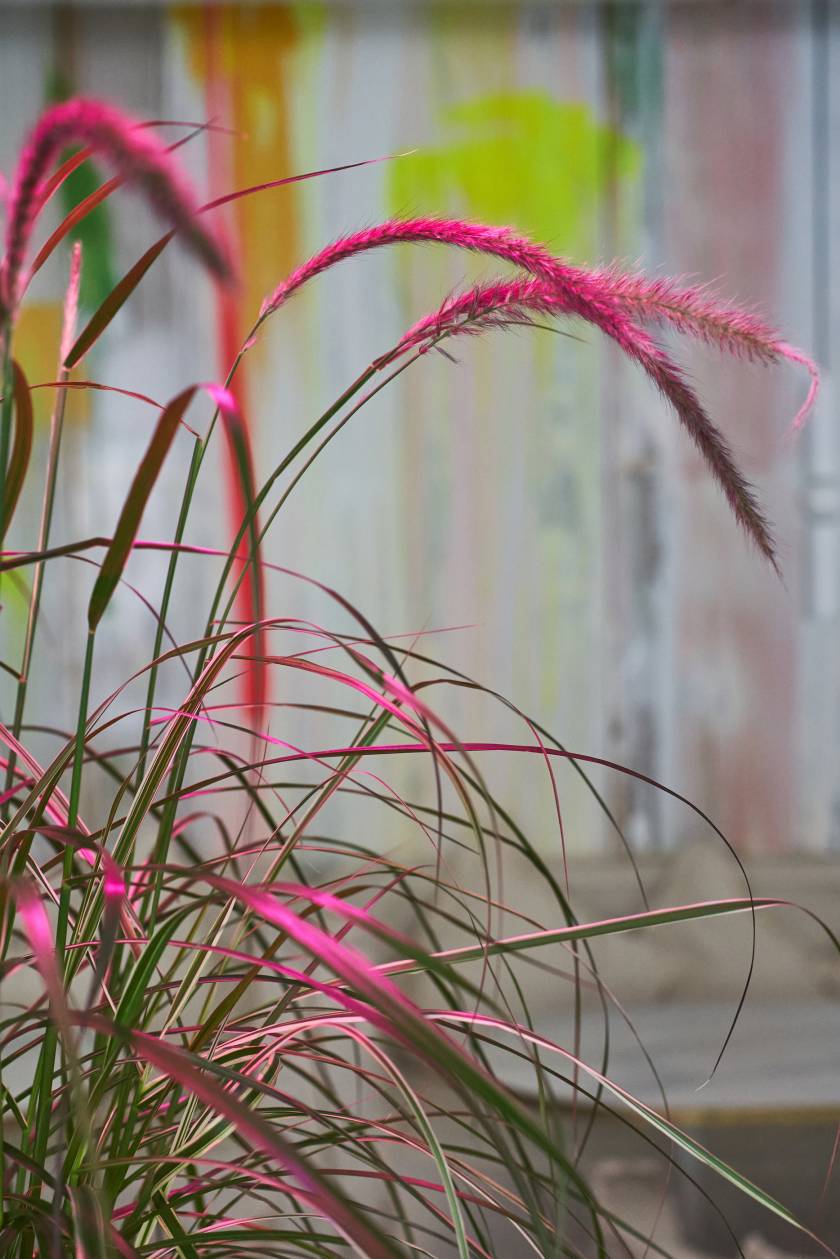 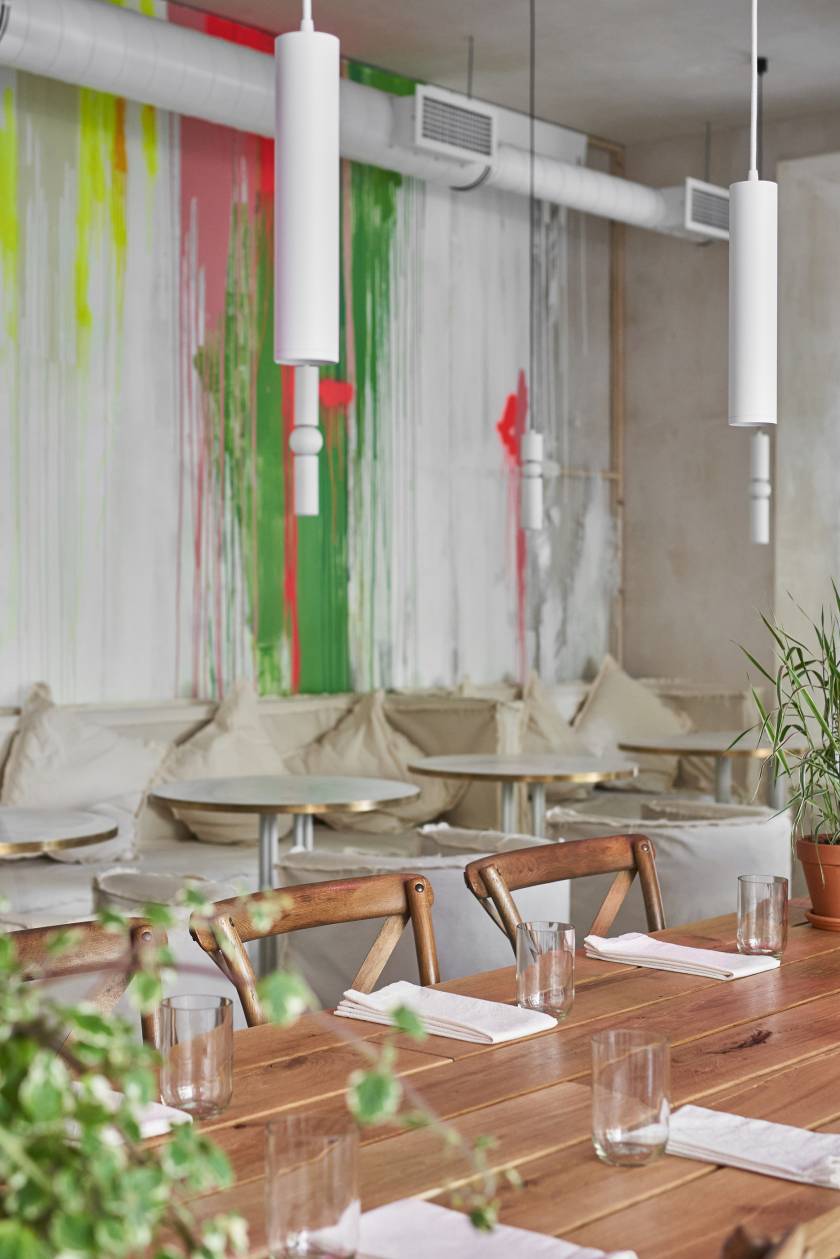 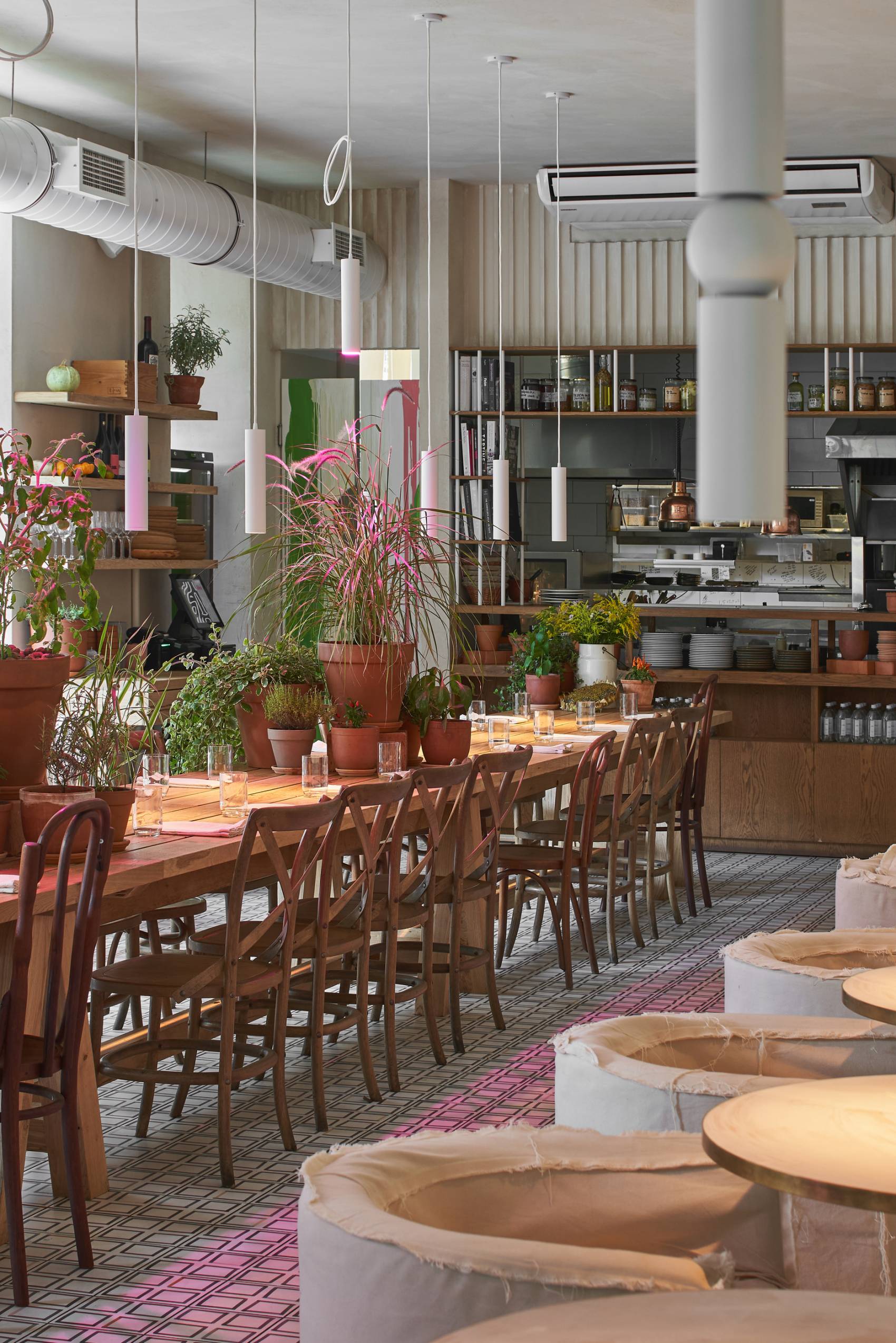 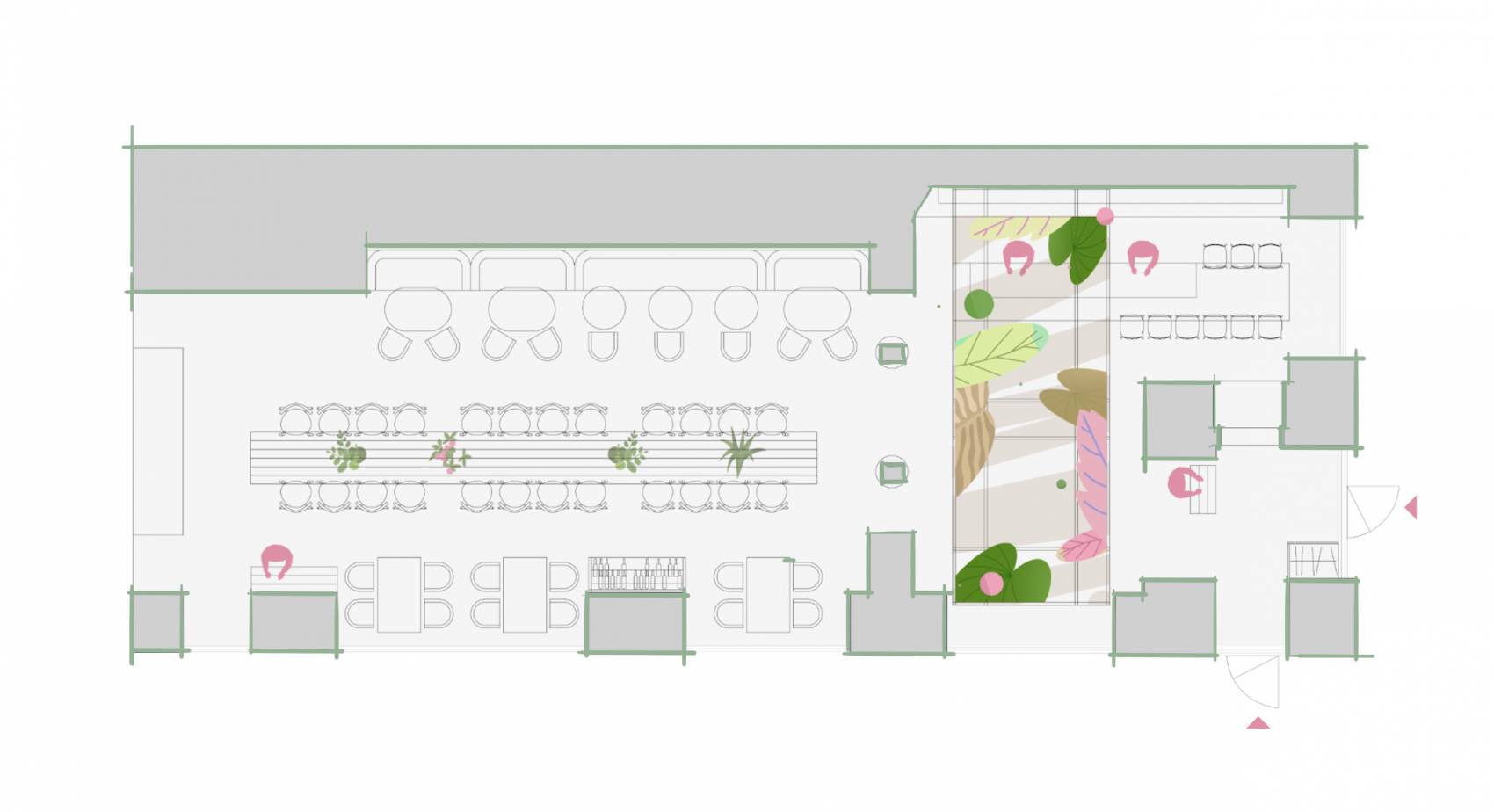 go to category
Osteria Betulla
restaurants & bars st.petersburg
80 m2
back to all 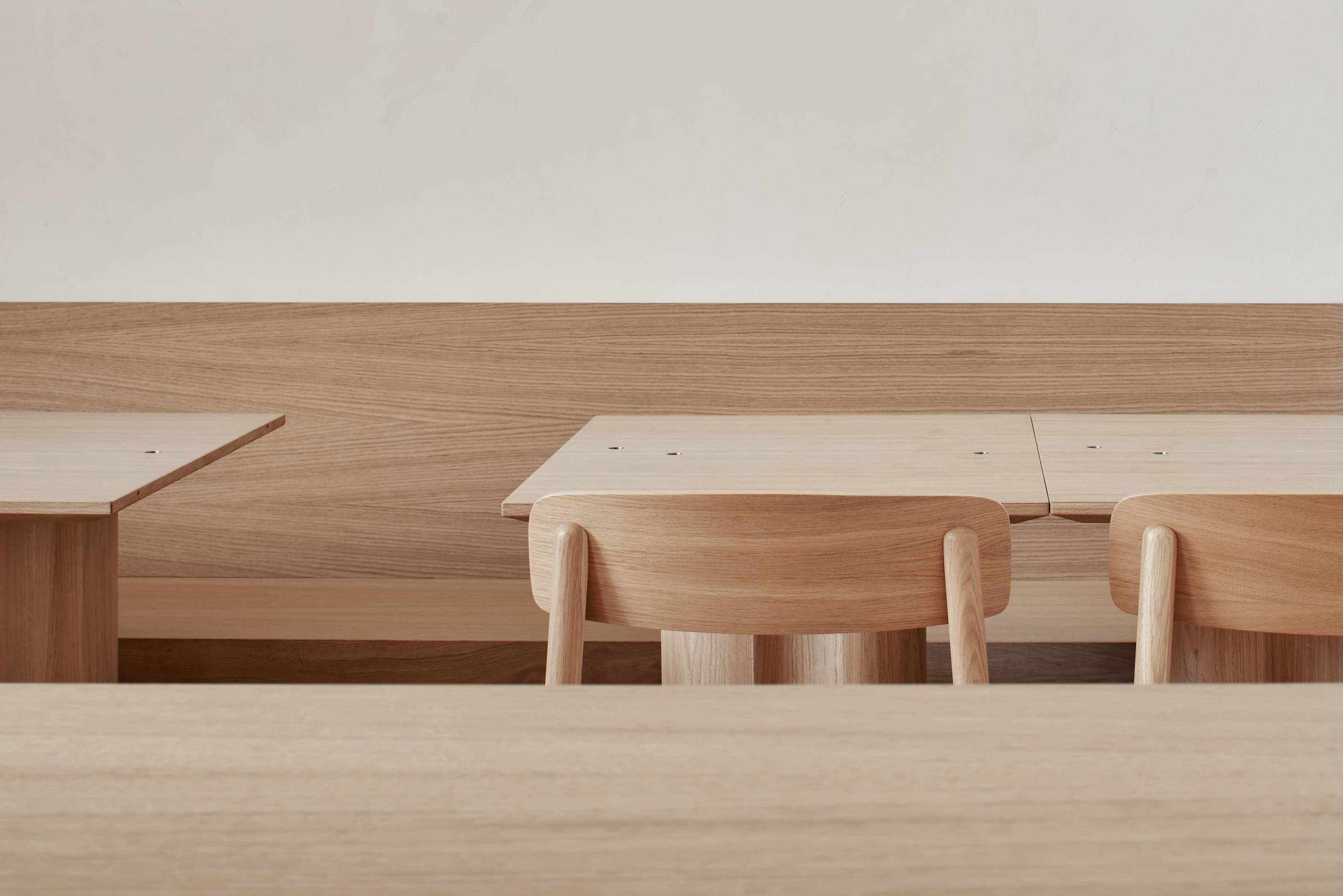